RIVERSIDE, Calif. – The much-anticipated Cheech Marin Center for Chicano Art, Culture and Industry at the Riverside Art Museum became a reality today (6/27) when Gov. Brown signed the new state budget, which includes a $9.7 million allocation of state funds to create in downtown Riverside the first major collection of Chicano art in the world.

The funding from the state Legislature -- proposed and championed by Assemblymember Jose Medina, D-Riverside -- means that the fundraising effort known as “Reach for the Cheech” has more than surpassed the goals set just over a year ago. The fundraising effort now has raised close to $13 million to transform Riverside’s existing Main Library into a world-class arts facility.

“This is a historic day in Riverside as this community, through its local fundraising and its advocacy with our partners in Sacramento, has made The Cheech happen,” Mayor Rusty Bailey said. “We are immensely grateful to Assemblymember Medina and the Riverside Art Museum for bringing this center to Riverside. Our residents and our business community will benefit from the addition of a major cultural amenity that drives a wave of new visitors to our hotels, restaurants and shops.”

The Riverside Art Museum already had raised about $3.1 million, including an initial $1 million allocation of state funds that was announced last year. “The Cheech,” as its namesake has affectionately dubbed the museum, would occupy space on Mission Inn Avenue immediately adjacent to the Mission Inn Hotel & Spa. The Main Library is relocating a few blocks away.

Assemblymember Medina has continued to build support in Sacramento for an additional allocation of state funds to make the museum a center for describing the contributions of Latinos in California. Art is a powerful storytelling tool, and Marin’s collection is especially well-equipped for such a task.

“For too long, the story of Latinos and their contributions to the arts have been overlooked,” Assemblymember Medina said. “The Cheech will help bring the real stories and rich history of the Latino community to all Californians.”

The Cheech will be a permanent home for Marin’s more than 700 works of Chicano art, including paintings, sculptures and photography, making up the most prominent collection of its kind in the U.S. It is expected to draw patrons from all over the world to downtown Riverside.

“I have dreamed for many years of finding a home for the hundreds of pieces of art that I have spent much of my life collecting, protecting and showing, when possible, at major museums around the world,” Marin said. “The Riverside community has made this dream come true, and I am overjoyed that this incredible center will open in the heart of a community I have come to know and love.”

Marin was in Riverside earlier this month to participate in an event to thank Altura Credit Union for its $600,000 pledge to The Cheech. That donation helped the Riverside Art Museum reach a fundraising goal of $3 million by the end of May that was spelled out in a memorandum of understanding (MOU) between the City, the Riverside Art Museum, and Cheech Marin. The Altura contribution pushed the funds that had been raised at that point to $3,131,547.91.

“The generosity of the Riverside community, and the way the community has embraced this vision, has been immensely gratifying,” said Lucile Artnzen, President of the Riverside Art Museum (RAM) Trustees. “To think about what we have accomplished in about 14 months, both locally and in Sacramento through Assemblymember Medina, it’s truly an overwhelming feeling of joy and gratitude. We have a strong foundation of funding that will all be used to renovate the old library into a world-class art center. As we continue to fundraise, this base of great support only strengthens our efforts. ”

Later this summer, the City and Riverside Art Museum will be entering into a new MOU that will address the conversion of the library, a management agreement, and new fundraising goals. The involved parties all hope to open The Cheech in 2020.

“We have come a long way in a short amount of time, and there are many, many people to thank for their roles in this success,” said Mayor Pro Tem Chris MacArthur. “Our city, already the downtown of Inland Southern California, is poised to play an even bigger part of telling the story of California’s growth and success.” 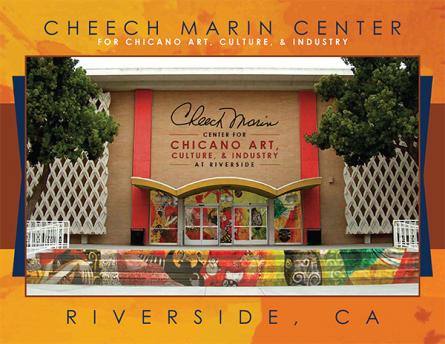