Riverside, CA – On Tuesday, January 26, 2021, officers assigned to the Riverside Police Department’s METRO Team conducted surveillance in the 4600 block of Tomlinson Avenue for a wanted parolee at large.  This suspect had recently led officers in pursuit on Tuesday, January 19th, but was able to evade the pursuing officer along Adams Street and the 91 Freeway.  Officers were able to determine the suspect’s identity and learned he was on parole for assault with a firearm and wanted on an outstanding parole violation warrant.  Due to the suspect’s history of violence and use of weapons, the METRO Team began looking into his whereabouts.

At approximately 4:10 p.m. and after about 40 minutes of surveillance, METRO Officers observed the suspect and attempted to take him into custody when an officer involved shooting occurred.  Paramedics with the Riverside Fire Department responded and treated the suspect, then transported him to a local hospital where he is currently listed in critical condition.  A firearm was found in the suspect’s possession at the time of his arrest.

Investigators with the Riverside County District Attorney’s Bureau of Investigation responded to the scene and assumed the investigation.  They are being assisted by detectives with the Riverside Police Department’s Robbery – Homicide Unit, along with Specialists from the Forensics Unit.  The suspect’s identity is being withheld pending his release from hospital care and transfer to a Riverside County Sheriff’s correctional facility.

This officer involved shooting investigation is still ongoing and there are no further details to release at this time.  Anyone with information is urged to contact Senior District Attorney Investigator James Campos at (951) 955-5400 or jamescampos@rivcoda.org, or Riverside Police Detective Josh Ontko at (951) 353-7135 or jontko@riversideca.gov.

A Critical Incident Video of this incident can be viewed at https://www.youtube.com/watch?v=Q7Oo3lNCyC8&t=22s. 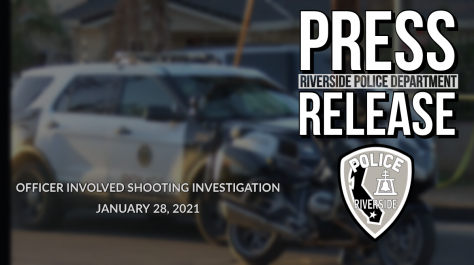