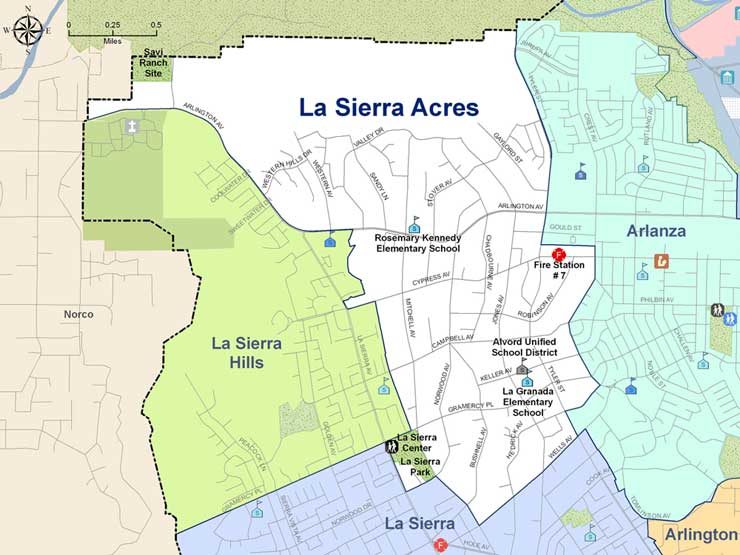 La Sierra Acres takes its name from the Mexican land grant known as Rancho La Sierra de Sepulveda. The original 17,500-acre Rancho was used for grazing cattle, and encompassed most of the La Sierra neighborhoods, as well as portions of Corona and Norco. In 1872, Abel Stearns purchased the land, which was later acquired by Willits J. Hole. Hole Ranch was established and water was brought to the area. Starting in 1910, the land was subdivided and used for subsistence farming. The area remained under the jurisdiction of the County until 1964, when the area was annexed into the City of Riverside. The neighborhood is bordered by the Santa Ana River Wildlife Area and Santa Ana River to the north, the La Sierra Hills neighborhood generally west of La Sierra Avenue, the La Sierra neighborhood southerly of Wells Avenue and the Arlanza neighborhood to the east.

La Sierra Acres is well served by schools, public facilities and parks and is home of the Alvord Unified School District offices. Schools in the neighborhood include La Granada and Rosemary Kennedy Elementary Schools. The Arlanza Fire Station No. 7, located on Cypress Avenue just east of Tyler Street, proudly serves the area. La Sierra Park, Community Center and Senior Center are situated at the corner of La Sierra Avenue and Gramercy Place. The City’s Park and Recreation Master Plan proposes the Santa Ana River Parkway and secondary interconnecting trails to traverse the neighborhood. The parkway trail is already established along La Sierra Park and east of the La Sierra Acres neighborhood. This coast-to-crest trail will eventually span 100 miles and will be linked with a series of hubs within parks, including La Sierra Park and the Savi Ranch Park Site along the way.