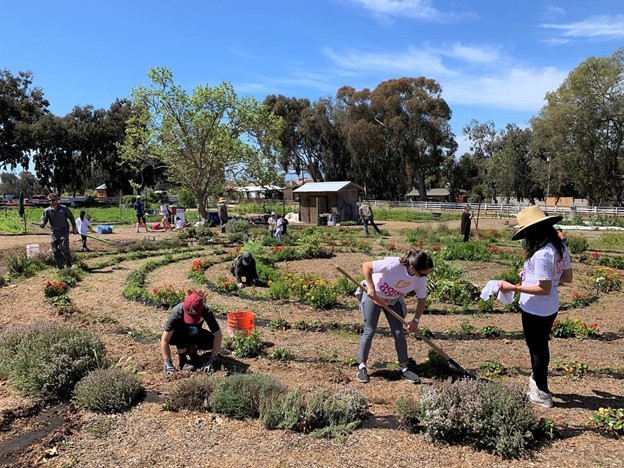 Volunteers work on a community garden in Riverside. Courtesy GrowRIVERSIDE.

Riverside’s urban agriculture experts convened in 2014 to discuss the sprawling 4,800-acre greenbelt in the middle of the city. The resounding message was to create a robust local, sustainable food system that catapulted a city-sponsored, community-driven initiative called GrowRIVERSIDE.

“A food system is a tall order with lasting implications for the environment, the economy and community health,” said Joyce Jong, Senior Project Manager for the City of Riverside.

The scope of the multi-stakeholder initiative is massive. GrowRIVERSIDE activities tackle food waste and security, assist growers, as well as industries downstream from agriculture, create jobs, and support farmers, particularly those entering the workforce.

“The average age of a farmer in California is in their sixties and that number keeps increasing,” said Jong, a third-generation farmer herself. “You can’t have a food system without farmers.”

From the development of a Next-Generation Farmer Training Program to the first urban agriculture project in Riverside’s Northside neighborhood, GrowRIVERSIDE’s efforts are taking off, with the help of local and state grants.

“Agriculture has been a cornerstone of the City of Riverside since its inception.” Mayor Patricia Lock Dawson explained. “The Greenbelt of Riverside has a generations-long history of being a national leader in the navel orange industry. Having spent my childhood in the Greenbelt, I am intimately familiar with its past and its promise.”

Another success is the Riverside Food Hub, the nation’s first produce distributor operated by a school district, where Riverside Unified School District  sells local fruits and vegetables to restaurants, child care centers, and hospitals that do not have access to this seasonal produce. In 2020 during the COVID-19 pandemic, the Riverside Food Hub was instrumental in packing 98,000 food boxes that were distributed to families and individuals facing food insecurity impacts from the pandemic. A key GrowRIVERSIDE collaborator is the Riverside Food Co-op, a member-owned, member-run grocer supported by committed residents working to improve local economic conditions and environmental health. The group is currently building up its membership base to eventually open a grocery store.

“Our vision for the store is to sell as much locally-grown produce as possible,” said Sue Struthers, Board Member and Treasurer of the Riverside Food Co-op. “Everybody eats and almost everybody grocery-shops. It matters that your money stays here."

Keeping everything local matters for the economy too.

“What is incredible about a food cooperative is they are an economic engine to create jobs and support the food distribution piece all the way back to the farmer,” Jong said.

For a $100 fee, members access the Co-op’s bounty of local honey, citrus, soap, produce, and beer.

“It’s a way of taking care of the community and celebrating what is Riverside,” Struthers said.

To tackle food waste, in conjunction with GrowRIVERSIDE, the Co-op organizes two volunteer-based projects Riverside Food Rescue, diverting edible food from landfills, and Gleaners for Good, picking uneaten citrus from backyards and moving it to food pantries. The cooperative also contracts with the City and CalRecycle to transport rescuable food from restaurants, school districts, and stores to feed the hungry.

Volunteers collect fruit from the trees of City of Riverside residents and deliver it to Feeding America, Riverside’s food bank, and other local food pantries. Courtesy Riverside Food Co-op.

The results of these programs are outstanding, considering up to 40% of all food is wasted in the United States, according to the USDA. Volunteers collected and salvaged almost half a million pounds of edible food between May 2018 and June 2021. This effort also led to the reduction of 16,400 metric tons of carbon dioxide (CO2) emissions because when organic matter decomposes, it releases methane and other greenhouse gasses.

“We’re able to mitigate our environmental footprint while getting edible food to families and individuals in need,” Jong said. “Building out resources to support local is the crux of our work.”

For information about Riverside Food Co-op, go to www.riversidefoodcoop.com. 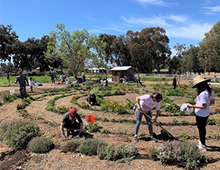