Riverside, CA – On Monday, May 21, 2018, Riverside County law enforcement agencies and surviving family members will remember those peace officers who have died in the line of duty at a solemn ceremony. It will take place in front of the “Safe in His Arms” memorial statue, at 4102 Orange Street in Riverside, beginning promptly at 6:15 p.m.  The public is invited to attend the ceremony and participate in the moderate run/jog which will begin prior at 5:45 p.m., at the corner of Orange Street and 12th Street.  Registration is NOT required for the run and is open to everyone of all ages and abilities.

The ceremony, steeped with police service traditions, will recognize those who died in service prior to 2018.  Fortunately, Riverside County did not see the tragedy of a Fallen Officer this past year, but the memory of losing Jose “Gil” Vega and Lesley Zerebny of the Palm Springs Police Department in 2016 still rests in the forefront of all our hearts.

Join us as we honor those who have laid down their lives for the community members of Riverside County, and to support the families and friends they left behind.

There will be free parking available in the parking structures located at 3535 12th Street and 4080 Lemon Street.

TEMPORARY ROAD CLOSURES AND NO PARKING AREAS ON MAY 21, 2018 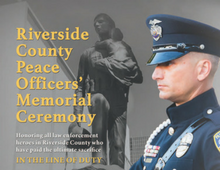