RIVERSIDE, Calif. – Joyce Jong, Agricultural Business Development Coordinator for the City of Riverside, has been presented with the first ever “Citrus Hero Award” by a state agency in recognition of her work locally in fighting the impact of the Asian Citrus Psyllid, which spreads a disease that kills citrus trees.

The Citrus Pest & Disease Prevention Program praised Jong for her work during the past two years in educating residents on how to inspect their trees for the psyllid and effects of the disease Huanglongbing, or HLB, also known as citrus greening disease, which has caused major damage to citrus in other parts of the country.

“Riverside is synonymous with citrus. It’s not only part of our heritage, but also an important economic driver for our community,” Jong said. “Additionally, most homes in our community have backyard citrus trees, so I see it as critical for our residents to know what they can do to protect their trees.”

Jong sets up community meetings, shares information with residents and members of the citrus industry, and works with local elected officials to get the word out regarding the dangers of HLB. In addition to creating a multifaceted public outreach and education campaign, Jong also has served as a spokesperson for the program and works with the media to educate the public on the dangers.

“Citrus is part of our DNA in Riverside, so it’s imperative that Riverside growers and residents are promptly and properly informed about this serious threat,” Mayor Rusty Bailey said. “We’re very fortunate that Joyce Jong has been so successful in getting the word out.”

The Citrus Pest & Disease Prevention Program regularly reaches out to city governments and local elected officials throughout the state through City Council meetings, one-on-one briefings and other communication efforts. These collaborative relationships with more than 400 cities throughout California enable elected officials and government leaders to share the information provided by the program with their constituents.

When Huanglongbing was found in Riverside County this past July, Jong worked with CPDPP to engage with local media. The resulting new coverage drove more than 20 calls to the state’s hotline with residents eager to have their trees inspected and tested. Other measures included:

“If there’s a way to reach the Riverside community, Joyce Jong has employed it in her far-reaching educational campaign,” Mayor Pro Tem Jim Perry said. “Her efforts have greatly increased community awareness of this serious threat to our citrus industry and the backyard trees so many residents enjoy.” 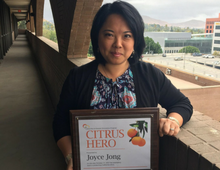