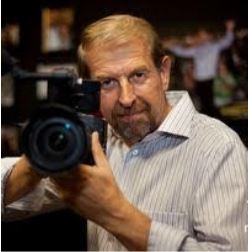 John Goolsby said he discovered his passion and talent in filmmaking in the 1980s when he began producing training videos for grocery giant Safeway Stores. Four decades later, the Riverside resident has made more than 3,500 films in 37 countries.

Goolsby is the owner of Godfather Films, where he produces everything from heartfelt wedding videos to thought-provoking documentaries. The recipient of dozens of awards, including multiple Telly Awards, Goolsby has been named one of the Top 25 Event Videographers in the World.

He credits part of his success to the tight-knit community of Riverside.

“Because we have such a close-knit community of business leaders who all seem to enjoy supporting each other while helping our community grow, we seem to grow every year with networking and word-of-mouth referrals,” Goolsby said.

Goolsby said he found his way to Riverside in 1984 by way of Orange County. With three children in tow, he searched for a town that provided affordability and quality of life. John Goolsby and his team at Godfather Films.

Over the years, Goolsby said he discovered more than just a family-friendly setting in Riverside. He found a city that attracted an array of businesses and workers — many of whom are in need of a quality filmmaker.

“Riverside is home to tons of large and innovative businesses that utilize video production services for advertising, training, and in-house communications,” he said. “We have so many great customers right here in Riverside and the potential for new customers for our business seems to increase every week.”

The increase in business has also happened during COVID-19 despite the many challenges the pandemic delivered, Goolsby said. He said he found continued success during a challenging time because he adapted to current needs.

<“We heard the word ‘pivot’ a lot during the pandemic, but for businesses like ours, we've always been pivoting by staying current with emerging video technology and communication techniques,” Goolsby said. “Adapting to current trends and needs is really nothing new...we just had to do it quicker this time. We've been live streaming for years, but right at the beginning of the pandemic we knew we had to add to our arsenal of equipment and the software needed to accommodate more locations and viewers.”

Goolsby and his team also introduced another service to customers over the past year — the ability to quickly request changes to videos.

“Once we have scripted, filmed, and edited a video communication, we send our client an interactive link where they can watch the film on any device and click right on the film to add comments that go right to our editor allowing us to tweak the film to the client's satisfaction in a fast and time-efficient manner for us and the clients,” he said.

Looking ahead, Goolsby said he’ll continue to look for ways to grow his studio and its services. In the meantime, he enjoys living in the robust City of Riverside where his business is supported.

“You can join the Chamber of Commerce and have unlimited access to business owner introductions,” he said. “You can go have lunch downtown and end up sitting next to the mayor, civic leaders, or fire chief.”

Godfather Films is part of a  cadre of growing entertainment and film production companies in Riverside. In fact, the city prides itself as the city of arts and innovation and is a growing venue for film productions.

“Riverside’s thriving arts scene is reflective of our city’s diversity,” said Margery Haupt, arts and cultural affairs manager for the City of Riverside. “We’re proud to see our community members elevate their voices through film, visual arts, performing arts, and literature.  We anticipate the creative industries to continue to grow. Art and the creative economy is one of the best ways for economic impact, equity, diversity, and sustainable change in our community."