Mayor uses final State of the City address to praise residents’ ability to work together, emphasizes need to bring a sense of urgency to alleviating homelessness

RIVERSIDE, Calif. – Mayor Rusty Bailey praised the city’s residents and business community for creating strong relationships that have helped Riverside overcome many obstacles in the past, and he encouraged Riversiders to use that “relational capital” to address the local impacts of a statewide housing crisis.

“Relationships are like a form of concrete – mixed by common ground, problem solving and mutual benefit,” Bailey said. “This is the Riverside that I have poured my life’s work into for almost two decades, and this is the Riverside I hope future generations will serve and love as much as I do.”

Bailey made the comments during the annual State of the City address, his final such address to the city. After two terms, Bailey is not seeking reelection and will leave office in 2020.

He noted that Riverside is leading Inland Southern California in many economic indicators and that the city’s focus on intelligent growth and development has sparked almost $2 billion in private investment in the past five years. He also said the entrepreneurial spirit is alive and well in Riverside, with small business employment up 37 percent.

To reach its goals, Riverside must depend on three cornerstones – economic development, housing and regional leadership, Bailey said. He challenged local business owners– and City Hall – to buy local whenever possible and sink available investment dollars into their hometown. He also called for a stronger focus on “economic pollinators,” which are self-financing private businesses, entrepreneurs and partnerships that can spur local economic growth.

The dearth of housing across the state, and in Riverside, is a major economic opportunity for developers, Bailey said. Southern California needs to build 1.3 million housing units by 2030, including more than 18,000 in Riverside. To meet that goal, Riverside will have to approve six times as many residential units than have been permitted in the past 10 years.

“The shortage of affordable housing is one contributing factor to our homelessness crisis,” Bailey said. “But this housing depression is about more than just homelessness.”

Riverside is a leader both on the regional level and statewide, Bailey said. From meeting with Gov. Newsom as part of the Big City Mayors group to advocating regionally for a more balanced approach to locating housing across Southern California, Riverside’s voice is being heard like never before.

“These successes are OUR successes,” Bailey said. “But the bottom line up front is this – California, and thereby Riverside, is in a housing and homelessness crisis, and we need to treat this emergency with a sense of urgency.”

Calling for an “all hands on deck” approach, Bailey said the city will work with local school districts to end homelessness among school children. And he challenged attendees to get involved with the effort to find housing for 122 children living in cars, shelters and hotels.

“This is unacceptable,” Bailey said. “This must change!”

The Greater Riverside Chambers of Commerce presented Riverside Unified School District with the Riverside Hero Award, which goes to a group or individual who has made a significant contribution to promote the community at the state or national level during the past year. The Chamber also announced winners of the annual Beautification Awards from Keep Riverside Clean & Beautiful.

Bailey announced Gabriel Maldonado as the winner of the Dr. Carlos E. Cortés Award for Championing Diversity and Inclusivity. The award is named for the UC Riverside professor emeritus of history who is the single most influential force in shaping the City of Riverside’s Inclusivity Statement, which guides the City’s efforts on this important issue. An internationally recognized scholar on race and ethnicity, Dr. Cortés’ decades of groundbreaking research, writing and consulting work make him one of America’s leading voices on diversity.

The speech is available for viewing at: https://youtu.be/Np_2aFv8u5o 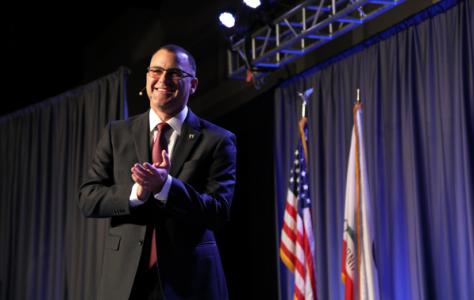