City will spend $1 million per year in Measure Z monies to fund $6.6 million effort in next three years

RIVERSIDE, Calif. – Residents and business owners throughout Riverside will see their street trees trimmed faster after the City Council allocated $3 million in Measure Z funds to help pay for a $6.6 million effort during the next three years.

The City Council voted Tuesday (6/12) evening to spend $6,679,536 on a three-year contract with West Coast Arborists, Inc., with the option of three years of extensions, and to establish a schedule for trimming neighborhoods throughout Riverside. The contract is designed to provide for the trimming of 21,000 to 23,000 trees per year of the 150,000 street trees throughout Riverside.

The infusion of $1 million per year from Measure Z, the voter-approved sales tax measure, will enable the city to shorten the amount of time that passes between tree trimmings. In recent years, a specific tree could have gone 8-9 years between trimmings; this action cuts that to 6-7 years, meaning trees will be trimmed more frequently.

“This is a great example of promises made, promises kept,” Mayor Rusty Bailey. “Thanks to the voters who approved Measure Z, we can now take better care of our street trees and get them trimmed more quickly, which keeps them healthy and attractive, while reducing the likelihood of falling branches and other safety issues.”

Riverside has an estimated 150,000 street trees, including 135,000 in parkways or along the front or side of homes and businesses, and 15,000 within medians and areas maintained by the City. There are another 35,000 trees in parks. The value of these trees is estimated at more than $300 million.

Measure Z was approved by voters in November, 2016, and increased the sales tax in Riverside by one penny per dollar spent. The City began receiving the additional funds in mid-2017, and injected $1 million of Measure Z funds into the tree trimming program that year.

The new $6.6 million contract with West Coast Arborists includes funds for tree trimming, emergency and scheduled tree removals, palm tree skinning, root pruning, and young tree care and watering. The new agreement also will create a citywide inventory, using GPS coordinates, of all trees that are being planted, removed, trimmed or otherwise worked on by the contractor.

“Riverside is famous for its canopy of beautiful trees, which was decades in the making,” Mayor Pro Tem Chris MacArthur said. “But with that canopy comes the responsibility of tree trimming, and we are grateful to the voters for providing additional resources to get this done.”

More information, and a map for which neighborhoods will be trimmed according to each fiscal year, can be found at: https://aquarius.riversideca.gov/clerkdb/0/doc/256193/Page1.aspx

The Parks, Recreation and Community Services Department will continue with its existing contract with West Coast Arborists, but will have the option of joining the citywide contract at a later date.

The new contract with West Coast Arborists also includes changes to the Resi-Pay program, which gives residents the option to have a street tree trimmed more frequently than in the existing schedule, if the resident is willing to bear the cost. About 200 residents per year do so.

The trimming service will be $184 per tree in the first year of the contract, increasing by $7 each of the next two years. The cost, which is lower than the average rate is charged by tree trimming firms, is designed to cover the cost of sending a trimming crew to a single tree that is not in close proximity to where other work is already scheduled.

A new option allows residents to have only the seed pods removed from palm trees at a rate of $75 the first year, increasing to $80 in the second year and $85 in the third year.

Residents can continue to hire their own firms to trim street trees by obtaining a no-fee permit from the City. 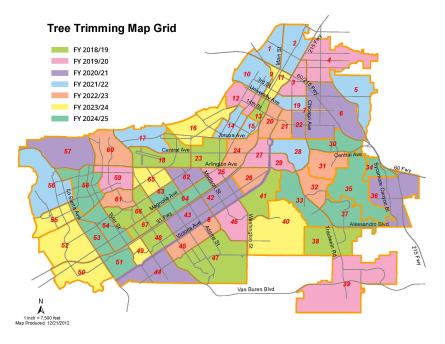