In 2020, Valtteri Salomaki and Ethan Castro, founders of Riverside startup EDGE Sound Research, presented their vision for the future of audio at the annual Consumer Electronics Show (CES) in Las Vegas.

“Everyone thought we were absolutely crazy when we said you could feel and hear sound, turning your environment into a high-fidelity audio system,” said Salomaki, EDGE’s CEO.

At CES this year, the feedback on EDGE’s patent-pending technology was nothing short of spectacular. The device, called ResonX, attaches to any piece of furniture, such as a gaming chair or couch, and uses tactile audio that turns sound into vibration providing completely immersive entertainment experiences.

“Our grandiose vision is to fundamentally change how we perceive reality where the virtual world and real world are one-in-one,” said Salomaki.

Perhaps the best compliment at CES came from a man who attended the show for 25 consecutive years and called ResonX “the most impressive thing” he’d ever seen. But even the most fervent EDGE Sound Research fan may not understand just how remarkable the technology is given its origin. 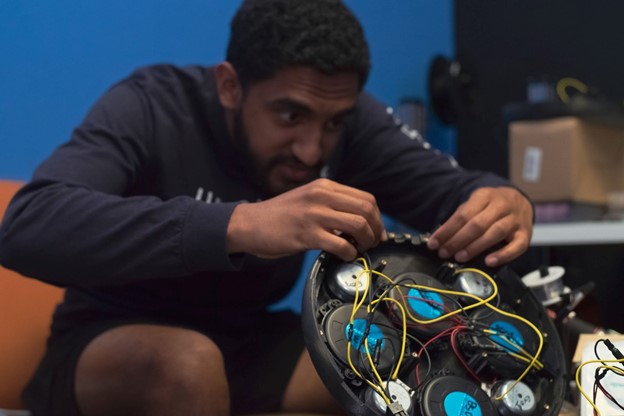 Castro, EDGE’s CTO, was born prematurely, and a series of ear surgeries left him permanently hard-of-hearing. Castro remembers lying next to a subwoofer and feeling the vibration of bass and drums travel through his body. This deep connection with sound led him to become a professional audio engineer and a doctorate candidate in music at the University of California, Riverside. That’s where he invented EDGE’s technology to share with others how he experiences sound, to help everyone “hear” better than they ever thought possible.

“I knew the technology was something bigger than a research project for a doctoral program,” said Salomaki, an MBA student at UC Riverside at the time.

The two quickly put together a team of engineers and have been working nonstop to grow from an idea to a venture-funded company. EDGE Sound Research recently participated in the Minnesota Twins Accelerator by Techstars to explore B2B opportunities, specifically applications in natural places of entertainment such as sports stadiums, music venues, and movie theaters.

The startup is distributing its first consumer sound system to 50 “alpha” users who will give them feedback before officially launching the device this summer. These early adopters include Emmy-nominated and Grammy Award-winning producers and audio engineers, as well as top-level streamers and gamers.

“We want tastemakers to give us insights into what they want from this technology so we can build products around that future, versus just introducing a device to people,” said Salomaki. 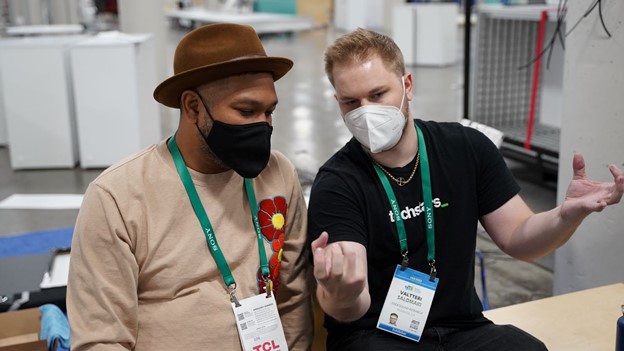 EDGE has secured $230,000 in pre-seed funding and will start publicly fundraising for a $4M seed round beginning this spring. Salomaki said UC Riverside and its EPIC Small Business Development Center have been massively supportive through mentoring, as well as strategies for fundraising, product design and business. Recognizing the necessity of having programs like UC Riverside’s EPIC SBDC and ExCITE incubator to support technology startups, the Riverside City Council recently voted unanimously to provide a total of $50,000 annually to support the programs.

“Riverside is a great strategic location to start a business with minimal capital and still have the necessary resources all around,” Salomaki explained. “There is a lot of excitement around entrepreneurship here.”

“Other startups see the excitement around the success and growth of EDGE Sound Research and know this is possible for them too,” Riverside Mayor Patricia Lock Dawson said. “EDGE is a leading example of the strength of Riverside’s startup community.”

For more about Edge Sound Research, go to www.edgesoundresearch.com.