Landslides occur in all U.S. states and territories and can be caused by many factors including earthquakes, storms, volcanic eruptions, fire and human modification of land. The deadliest landslides are the ones that occur quickly, like debris flows, often with little notice. Whether you are at home or out for a hike, the best way to prepare is to stay informed, and understand when a dangerous landslide is likely to occur. 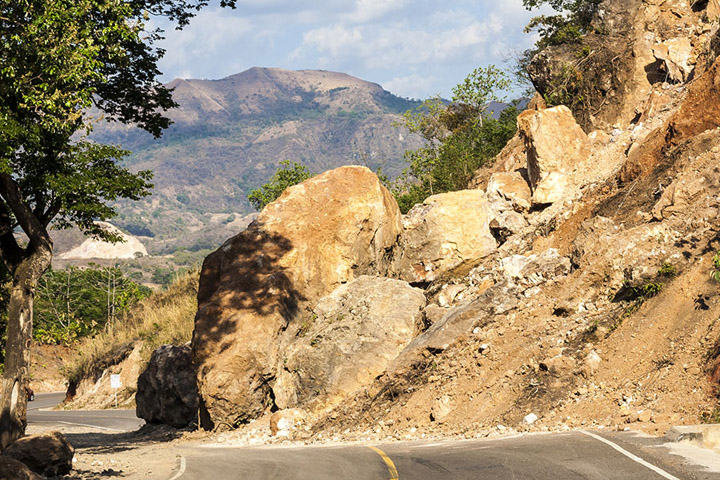 In a landslide, masses of rock, earth or debris move down a slope. Debris and mud flows are rivers of rock, earth, and other debris saturated with water. They develop during intense rainfall, runoff, or rapid snowmelt, changing the earth into a flowing river of mud or “slurry.” They can flow rapidly, striking with little or no warning at avalanche speeds (faster than a person can run). They also can travel many miles from their source, growing in size as they pick up trees, boulders, cars and other materials. Debris flows don’t always stay in stream channels and they can flow sideways as well as downhill.

When a wildfire burns a slope, it increases the chance of debris flows for several years. Although some landslides require lengthy rain and saturated slopes, a debris flow can start on a dry slope after only a few minutes of intense rain. “Intense” rain means a burst of rain at a fast rate, about half an inch in an hour. With debris flows, the rate matters more than total rainfall.

How to protect yourself or your property depends on the type of landslide. Land-use zoning, professional inspections, and proper design can reduce many landslide problems, but evacuation is often the only way to protect lives from a debris flow or other fast-moving landslide. Never ignore an evacuation order.